By Warsaw Park District on December 16, 2014 in History

By Harley Griffin with permission from The Daily Gate City.

As Warsaw is gearing up for its upcoming bicentennial celebration it is interesting to note how this area got its start.

Not much of anything existed here 200 years ago and traveling north along the Mississippi River must have been an adventure. Mostly wilderness spread east and west of the river with native American Indians being the only inhabitants.

The military forts constructed on the Mississippi some years prior to Illinois, Iowa and Missouri becoming states are an often overlooked part of early upper Mississippi Valley history.

While eventual development of this area was not directly connected with the establishment of these posts they did create an interest in this locality and brought its first settlers.

During the War of 1812, a detachment of troops under Major Zachary Taylor was forced to retreat down river after being assaulted by Sac and Fox Indians aided by an unexpected unit of British soldiers.

Taylor’s group was quickly overpowered and made a hasty exit from the area near the mouth of the Rock River near what is Rock Is1and, Ill., today.

The unit made its way down the Mississippi and landed across from the Des Moines River on the eastern bank of the river.

They quickly began construction of a rough stockade with blockhouses of round logs. This hastily built fort was named Fort Johnson. In spite of a worthy beginning Fort Johnson was doomed to failure. In the autumn of the same year the troops burned the blocknouses, destroyed the works, and retreated downstream to an installation near what is now Elsberry, Mo.

Fort Johnson always was known to exist on the bluff somewhere near the present day Mulberry Street in Warsaw, but the exact site was in question. Through persistent research by Joe Bartholomew and several other local citizens the location of the fort recently was discovered and the area has produced artifacts that support the site.

The War of 1812 had created much animosity between the Indians and Americans on the upper Mississippi so the government thought it necessary to protect travelers on the river in the new territory. The 5th Infantry was sent north from Fort Bellefontaine north of St. Louis to establish a fortification at the mouth of the Des Moines River.

The military unit likely found the charred remains of Fort Johnson but found a more commanding view of the Mississippi where they could monitor movements on the river more easily.

They cleared the area on the bluff which was north of the previously built Fort Johnson. It is here Fort Edwards was constructed and remained a military outpost until 1824 when it was abandoned by the military.

Much has been described of Fort Edwards and its military beginning, but little has been written about the fort after its closing in 1824;

It soon became used as a trading post and safe haven for the few settlers who had ventured into the wilderness. The American Fur Company, owned by John Jacob Astor, set up shop in the old fort and quickly began a busy trade. Russell Farnham, an experienced agent with the Astor Fur Company, was put in charge of the treading post and soon boats being loaded with pelts was a common sight on the river bank below the old fort.

Steamboats soon began to move up the river and the business flourished even more. Fort Edwards was soon becoming a popular stopping point on the Mississippi and in 1829 the first election was held for the newly formed Hancock County at the old fort.

In 1830’s, a tavern license was granted to Russell Farnham to better serve the new settlers and travelers.

In 1834, a number of fur traders and settlers were considering the formation of a duly constituted community. Two men who were instrumental in this endeavor were Maj. John R. Wilcox and Mark Aldrich. Wilcox was an engineering graduate from West Point Military Academy and was assigned to Fort Edwards. Apparently he found the area to his liking and remained after the fort was closed by the military.

Aldrich was a former clerk at Russell Farnham’s American Fur Company trading post north of Fort Edwards on the rapids.

This consisted of several log cabins along the Mississippi and would later become Keokuk.

In 1914, an interest developed concerning the early days of Warsaw and several pioneer families began an eager search for information about events of a century before. 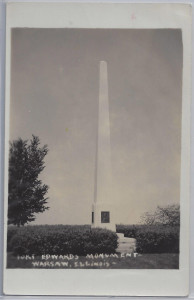 Phil Dallam, well-known editor of the Warsaw Bulletin, headed a committee to place a monument on the ground that was once the location of Fort Edwards. The Barre granite monument that stands today was chosen as proper memorial to honor the past. The monument was completed at a cost of $7,390 in which a good deal of the sum was raised locally.

Warsaw nearly outdid herself with a large three-day celebration that concluded with the unveiling of the monument. The Quincy Daily Herald newspaper estimated the crowd on hand at 10,000 people. In 1962, Warsaw ones again celebrated 150 years in existence with a large celebration many still remember today. The nearly week-long event drew large crowds once again who enjoyed the many activities.

Now, 50 years later, Warsaw will celebrate 200 years with a line up of activities that is sure not to disappoint.